This is the final post I will write for this particular blog. You see just as we are moving our blog is moving too. After all, without a full time nursery it seems a little silly to keep blogging about running a full time nursery.

But before I go I’d like to say I’ve had a great time these past 9 years running Ashdown Roses. The roses, the people I’ve met, our customers and most of all the folks I worked with. We are a family and that extends to everyone who came up and spent hours volunteering doing all kinds of things. So a big thank you to all of them.

Ashdown also gave me my “name” in the rose business and I know the opportunities presented now would not be there without it. But quite honestly the events of the past few years that prompted this blog have sometimes made it difficult to go to the old property one more day, knowing I have yet another battle to fight. I would have liked The War Of Roses to remain a past historical event.

More changes are coming and we’ll be announcing them soon. But we will still be in the rose business and so for now instead of focusing on producing rose plants we are going to focus on…

It's been a whirlwind month. As it appears the property isn't going to sell anytime soon and therefore we will not be able to use the equity to move and hunker down until the economy gets better, I decided to simply suspend plant sales. The overhead of running a nursery is simply too high and too risky during these times.

What helped push me into this was a trip to Seattle to do a workshop for the HRF group up there. Sue Hopkins invited me up and arranged everything. The day of the workshop some 40 plus rose growers from novice to experienced came, and for five hours we talked about feeding, care, pruning, climbers and the rose business in general.

I loved it! And apparently so did they because all stayed past 6:00 PM. The You Tube videos played a major part in convincing them to come. Lots of nice compliments on them.

What I realized that weekend, with a little prodding by Sue and Marji, is that there are rose things I can be doing that aren't about raising and selling plants. Like teaching, writing, leading rose tours, licensing and more.

So instead of trying to keep a plant production nursery going during these times, and particularly one that's been crippled, I decided to stop producing plants and focus on producing rose growers.

Someone told me during that weekend that in order for doors to open you have to purposefully close some. So I closed the door on selling rose plants and lookee here. Lots of open doors around us.
Posted by Paul Zimmerman Roses at 2:17 PM No comments:

This is a once or twice a week phone greeting usually around 8:30 AM on many a morning. The Mike was Malcom (Mike) Lowe. What followed was a rose conversation that could head in any direction from what roses to carry, to propagation, to new roses to find and always concludes with Mike asking about Pam and how we are doing personally.

Mike collected roses for years - mostly old roses. He began his collection in a time when in many cases the only way you could get many old roses in the U.S. was to bring them in from Europe. And import Mike did. Plants from here, budwood from there, the same variety from two different sources to compare them. All documented in a spreadsheet and photographed over and over again with the slides carefully sorted into reams of notebooks.

"Have you ever thought of starting a rose nursery?"

Was the conversation that started Ashdown Roses. Mike and Irene ran Lowe's Roses, a true labor of love and a nursery with a broad ranging selection of rose treasures.

Pam and I were thinking of leaving Los Angeles and permanently moving to our home in the Carolinas. Mike and Irene wanted to slow down a bit and Mike thought I might be interested in starting a rose nursery and continuing their work.

"Irene and I will drive down and give you hand".

Was the start of our first test crop budded in South Carolina now some 14 years ago. Mike and Irene piled into their station wagon and drove the 1000 miles from Nashua, NH to help me work with two budders I'd brought in. They not only brought more budwood but did tags, gave advice; anything they could do to help further me along by sharing their expertise gathered over 20 plus years.

"Let me send you cuttings"

Was the answer I know I can expect when I needed another rose from his garden to add to my collection. The only thing he ever asked for in return was to send him plants to sell out of his garden in the summer. He even offered to pay shipping and a small fee for them. We would just "add it to his bill" both knowing there is no way it would ever become a real one.

Was the totally unexpected phone call I got a week ago.

"Hi Mike, it's Paul. Thank you and Godspeed my Friend"
Posted by Paul Zimmerman Roses at 1:31 PM No comments:

My older sister is a Librarian. She has happily been employed as a Children’s Librarian first for a Public Library and for the last umpteen years in an elementary school. Her love of children’s books led her to start collecting them by buying them in thrift shops, garage sales; you name it she visited.

And of course after a while she ended up with more than she really wanted. She began to sell them, a small business was born and that is how we ended up on E-Bay.

She is going great guns over there with her now expanded to all kinds of books business. I asked her if she thought it might be one more way to sell roses and she said why not? My sister and I are a lot alike in that we will wade into most anything if for no other reason than the intellectual exercise.

A week ago I put one item on E-Bay. A collection of 10 ramblers we were overstocked on at an end of the year price. Bingo, a bid! So I put up more roses and we sold two more today.

And better yet we are finding new customers. For us being on E-Bay is as much about that as selling roses. It’s another marketing opportunity this amazing electronic age is offering us and we plan to grab it with both hands.

I wonder if Amazon.com does roses?
Posted by Paul Zimmerman Roses at 5:02 PM No comments:

How to Reach Us

The Background and Why We Are Moving

Like many small businesses we've been through some interesting times these past two years. Ours were made worse when the small town bank we worked with was purchased by a large conglomerate one. It was also the inspiration for this blog.

Rather than put the whole story here of what happened you can read it on our website by clicking here. We feel it will put some of what we write about in greater context. 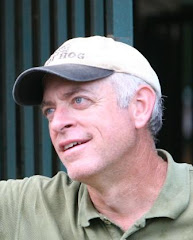 I own the joint

Office Manager and everything else that comes up.

They are the ones that really run the place

Some of our roses